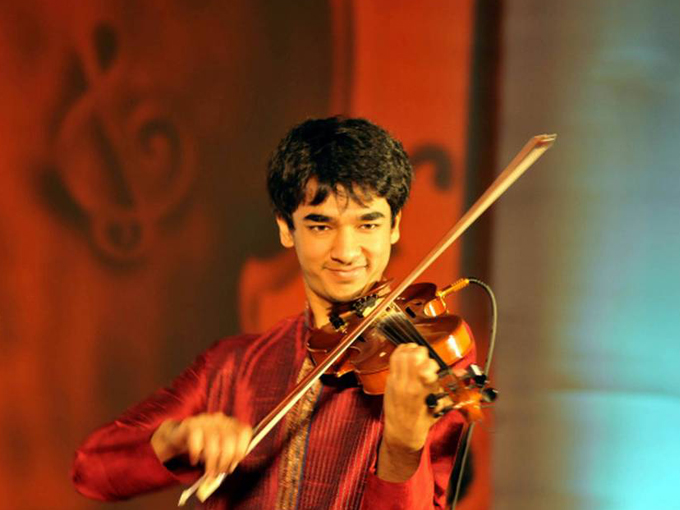 Touted as the 'New King of Indian Classical Music' by the Times of India when he was 16 and as 'India's 24-year-old Itzhak Perlman' by the Ozy Magazine, Ambi Subramaniam is the son of acclaimed Indian violinist, composer, and conductor, Dr. Lakshminarayana Subramaniam and brother of Indian/American singer-songwriter and pianist, Bindu Subramaniam.

The Indian/American violinist, pianist, and singer began performing at the age of 6. Fortunate enough to have a master in his father to train him in Carnatic violin from the age of 3, Ambi grasped the nuances of music from early childhood. Other than his father, he has been strongly influenced by Semmangudi Srinivasa Iyer, Jascha Heifetz, David Oistrakh, and Maxim Vengerov.

Born and brought up in Los Angeles, California, his family relocated to Bangalore in 1995. Blessed with a melodious voice, Ambi is also proficient in western classical violin, piano, and Carnatic singing under the able guidance of his father. The talented musician plays a 5-string acoustic or electric violin and a 4-string acoustic violin and endorses Realist violins and D'Addario strings.

As a fusion performer, he has delivered many solo performances and played duet violin concerts with Dr. L. Subramaniam. A regular performer at the Lakshminaraya Global Music Festival, Ambi has performed at festivals in Sri Lanka, US, UK, France, Iceland, South Africa, and Luxemburg and has been a participant in many events including Sounds of India, Violins for Peace, and Lincoln Center Out of Doors Festival. He has also performed his father's composition at the Seattle Symphony in 2013.

Ambi has received distinctions in Piano and Western music exams and is a three-time winner of the Philomena Thumbochetty Award for Best Western Classical Violinist. In 2007, he was featured in an album 'Violin Maestros' for which he won the Global Indian Music Academy Award (GiMA) and the prestigious BiMA Award for the same album. Another album 'Live at Neues Gewandhaus, Leipzig' which was released in 2009 got him another GiMA. The renowned violinist and composer released his classical album, 'Just Playing' in 2016 after his debut album, 'Indian Violin', released in 2013 which was an immense success. Other honors include the Ritz Icon of the Year Award, the Rotary Youth Award, and a golden violin he received from Sri Jayendra Saraswati when he was 18 years old.

Along with his sister, he is actively involved with the Subramaniam Academy of Performing Arts (SaPa) which is a music school founded by his parents, L Subramaniam and singer, Kavita Krishnamurthy. Started with a vision to promote global music in India, the school has trained over 4,000 underprivileged children in music. Apart from SaPa, the talented and gifted brother-sister duo launched a band called SubraMania in 2013. In 2016, the Spanish government invited SubraMania to celebrate 60 years of Indo-Spanish relations. This was also the inspiration for the band’s single, Esperanza. He has conducted masterclasses in music in Germany, Norway, Sri Lanka, Spain, and The Netherlands.