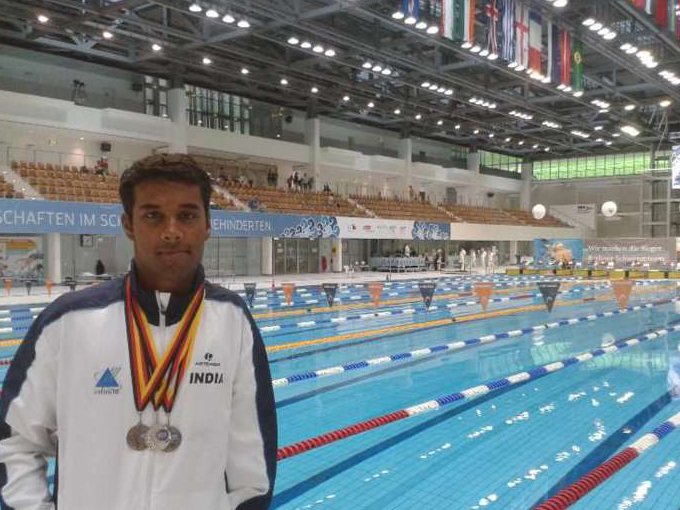 The gem cannot be polished without friction, nor man perfected without trials is a Chinese proverb. This is true for all of us because although we are born with abilities, we go through trials to realize this. Life has shown and keeps showing us that nothing is impossible when you have the determination, focus, support, and the will to succeed. We read stories of how people overcome difficulties to come out successful. So to have one of our very own go through the same and carve a name for himself in the world of sports is admirable.

Born with a deformed left hand, Sharath M. Gayakwad was apprehensive of joining swimming classes initially because of his disability, but eventually took up swimming at the age of 9 and participated in several swimming events for the disabled. However, his physical deformity made it hard for him to maintain the equilibrium.

Spotting him at a school event, John Christopher took him under his wing, trained him for 7 years and worked tirelessly to prepare him for competitions making this the beginning of a beautiful journey.

In 2003, Sharath got his first taste of success at the age of 12, when he won two gold medals in his first swimming competition. Overcoming challenges at every step, the Indian Paralympic swimmer from Bengaluru has won 55 domestic and 41 international medals - 4 Gold, 15 Silver, and 22 Bronze. He won four Gold, two Silver and two Bronze at the IWAS World Games in 2008; was a medalist in the IWAS Games held in Taipei and in Bangalore in 2009, respectively; won a bronze medal at the 2010 Asian Para Games, Guangzhou, China; and won a Silver and 2 Bronze medals at the 2011 International Deutsche Meisterschaften (IDM) Swimming Championships in Berlin, Germany. Sharath was the first Indian swimmer to qualify for the 2012 London Paralympics. He won six medals at the 2014 Asian Games and surpassed P.T. Usha’s record for the most number of medals by an Indian at a global multi-discipline event. Sharath was also the Asian record-holder in 2 categories – 50m Butterfly and 50m Breaststroke from 2010 to 2013.

Sharath was honored with the Arjuna Award in 2015 and was listed along with Indian sportspersons, gymnast, Dipa Karmakar and freestyle wrestler, Sakshi Malik by Forbes magazine among their Under-30 Super achievers in Asia in 2017.

A proud alumnus of Jain (Deemed-to-be University), his alma mater was also a source of encouragement where his training is concerned. "I joined on a sports quota with a good concession and was given time for training. My college was very supportive. They would hold special classes for me as I would spend six hours on training.”

Now a coach in Bengaluru, he spends six hours a day coaching kids, some of them who are differently-abled. Sharath is also a co-founder of Gamatics, a venture that offers high performance practice gears and equipment for swimmers.